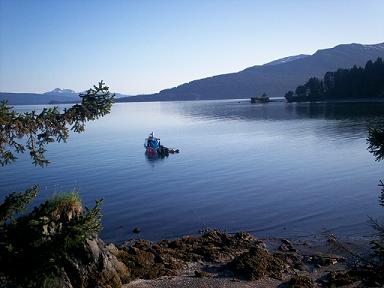 Who We Are: A Brief History

The people of Native Village of Afognak are the descendants of the original Alutiiq inhabitants of the village of Ag’waneq, which was located on the island of Afognak, three miles off the shore of Kodiak Island. We are a federally recognized tribe. Members of our tribe inhabited our ancestral village until the Great Earthquake and Tsunami of 1964. Today many of our members live and work in the City of Kodiak, the village of Port Lions, Anchorage, and the Lower 48 states.

The Alutiiq people have inhabited the Kodiak Archipelago for more than 7,500 years. Like hundreds of similar Alutiiq settlements along Prince William Sound, the Kenai and Alaska Peninsulas, and the Kodiak Archipelago, the people of Ag’waneq village enjoyed a subsistence lifestyle of fishing and hunting sea mammals from skin-covered kayaks. Our ancestors had a bartering economic system, trading goods and services as needed with their neighbors, from the Aleutian chain to Southeast Alaska. Men and women performed different, but complementary forms of labor.

The Alutiiq believed that all things, be they living or not, possess a spirit, which they honored. Shamans, who were highly regarded, communicated with these spirits and with the spirits of the five levels in the universe above earth.

Our written history began with the arrival of the state-chartered Russian American Company in 1784. The Russians, in need of a labor force, coerced many Ag’wanermiut men to leave our village to harvest sea otters for European markets. Many people died as a result of the Russians’ mistreatment. Later, the smallpox epidemic of 1837-1840 killed a great number of our ancestors. When the Russian Orthodox Church and the Czar intervened on our behalf, we were baptized and gathered, along with other Alutiiq people, into seven large communities, one of which was Ag’waneq, or, as it came to be known, Afognak. These years of disease and domination decimated the archipelago’s Native population and significantly changed our social, economic, and governance arrangements.

Both the Native people of Afognak and the Russian immigrants continued to live off the land—hunting, fishing, and gathering what our island offered. Despite tensions between the Russian American Company and our people, many Alutiiq people learned Russian, married Russian workers, and converted to Russian Orthodoxy. In so doing, our ancestors did not abandon Alutiiq tradition, but added on to it, retaining their Native identity. The Russian workers who married into the Alaska Native community grew accustomed to life in Alaska. When they retired, many opted to move into retirement communities that the Russian American Company built. One of these communities, Russian Town, was located adjacent to Aleut Town on Afognak Island, and, over time, the two communities combined became known as Afognak. Many of the Alutiiq residents of Aleut Town became fluent in Russian.

When the U.S. bought the occupation rights to Alaska, it turned a blind eye to our Native traditions, cultural practices and lifestyle, instituting a policy of zero tolerance for any language other than English in its schools. Nonetheless, our people continued to live a life that blended aspects of each of the cultures to which we were exposed; by the turn of the century, many young Ag’wanermiut were trilingual, speaking Alutiiq, our ancestral language, at home, Russian at church, and English at school. When commercial fishing began to flourish under U.S. business influence in the late 1800s, many canneries opened in Kodiak, and another group of people—fishermen from Scandinavia—arrived. While many of our people found employment in the canneries or in providing fish to the canneries, we began to face a new challenge to our subsistence lifestyle. The canneries’ demand for fish to export competed with our own need for food supplies. 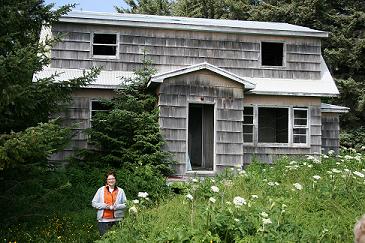 The first half of the twentieth century brought with it natural disasters. The eruption of the Katmai Volcano in 1912 covered the village of Afognak with three feet of ash. In 1964, the Great Alaska Earthquake and Tsunami virtually wiped out Afognak village. With help from the federal government and the Lions Club, survivors rebuilt the community at a new location on Kodiak Island and named the village Port Lions. Many tribal members opted instead to move to the city of Kodiak or to the “Lower 48,” returning home as often as possible for subsistence use of tribal lands.

To embrace, protect, develop, and enhance Alutiiq culture, protect our traditional use areas and encourage unity among the Alutiiq of the Kodiak Archipelago